The Wild Atlantic Way (Irish Slí an Atlantaigh Fhiáin) is a tourism route on the west coast of  Ireland that runs for 2,500 km (1553 miles) passing through nine Counties and three provinces. Stretching from County Donegal in the North to County Cork in the south and running through Leitrim, Sligo, Mayo, Galway. Clare, Limerick and Kerry – all on the rugged west coast of Ireland overlooking the Atlantic Ocean. 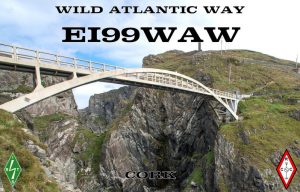 From 1st January to 31st December 2017 Irish Radio Amateurs will be on air with nine special calls – EI11WAW through to EI99WAW.  Each call will be associated with one of the counties making up the Wild Atlantic Way.  Each call will have its own distinctive QSL card depicting a highlight of the county linked to the call. 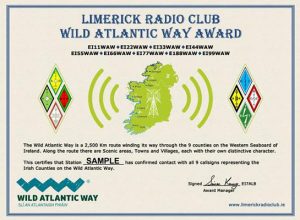 A Certificate will be made available for download to any station that works all nine calls,  any band any mode.  Sample below. Apply by email to QSL manager EI6AL giving name and call.  A certificate can also be sent by post – send €5 ($5) to cover postage either through Clublog, direct to EI6AL or via paypal to payments@irts.ie

County Cork, located in the province of Munster, borders four other couties – Kerry, Limerick, Tipperary and Waterford.  It has the second highest population of any county in Ireland. Mizen Head, located on the Beara Pininsula, County Cork, is the most southerly headland on Irelands Wild Atlantic Way.  Pointing into the North Atlantic, the Beara Pininsula has some of the most dramatic coastal scenery in Ireland.  The Fastnet rock is known as “Irelands Tear Drop” as it was the last image of Ireland for Irish emigrants sailing to other lands.

In an effort to get the first radio signal across the Atlantic Guglieimo Marconi erected masts near the village of  Crookhaven, Co Cork, with further tests made between Crookhaven, the Fastnet Lighthouse and Cape Clear Island.  These tests continued between 1901 to 1914.   Though unsuccessful on that trans-atlantic attempt, in 1902 Marconi went on to establish a telegraphic station in Crookhaven.  That facility was sold in 1914 and was eventually demolished in 1922.